A few more bugs were reported (thank you!), and I really wanted to get my list of known bugs down to zero. Unless people discover even more bugs this is likely to be the final release.

Users from the other 6502 platforms have also shown some interest in remastered versions. I don’t have any contacts in the Apple or Atari cracking scene, so I thought I’d put a note in here. If you’re interested let me know and I can help you navigate the project. 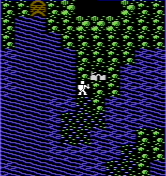